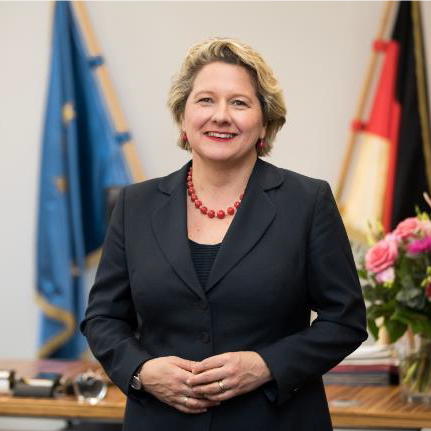 Svenja Schulze is Federal Minister for the Environment Nature Conservation and Nuclear Safety of Germany.

On 15 March 2018, Svenja Schulze took up office as Federal Minister for the Environment, Nature Conservation and Nuclear Safety of the Federal Republic of Germany. Schulze joined the Social Democratic Party (SPD) in 1988. From 1997 to 2000, and from 2004 to 2018, she was a member of the North Rhine-Westphalia state parliament. She was general secretary of the North Rhine-Westphalia SPD from 2017 to 2018. She has been a member of the SPD party executive (Parteivorstand) and the SPD executive committee (Präsidium) since 2017. In July 2010, she was appointed Minister for Innovation, Science and Research of the state government of North Rhine-Westphalia. She held this position until 2017.

Svenja Schulze is a member of the Arbeiterwohlfahrt (workers’ welfare association), the Mining, Chemical and Energy Industrial Union (IG BCE), the service-sector trade union ver.di and the Nature Conservation Union (NABU). She is a co-founder of the Frauenzeiten network.

She attended the Ruhr University Bochum where she graduated with a Master of Arts degree in German studies and political science. She initially worked in the field of advertising and public relations on a freelance basis and later as a business consultant, specialising in the public sector. Svenja Schulze was born on 29 September 1968 in Düsseldorf in North Rhine-Westphalia.